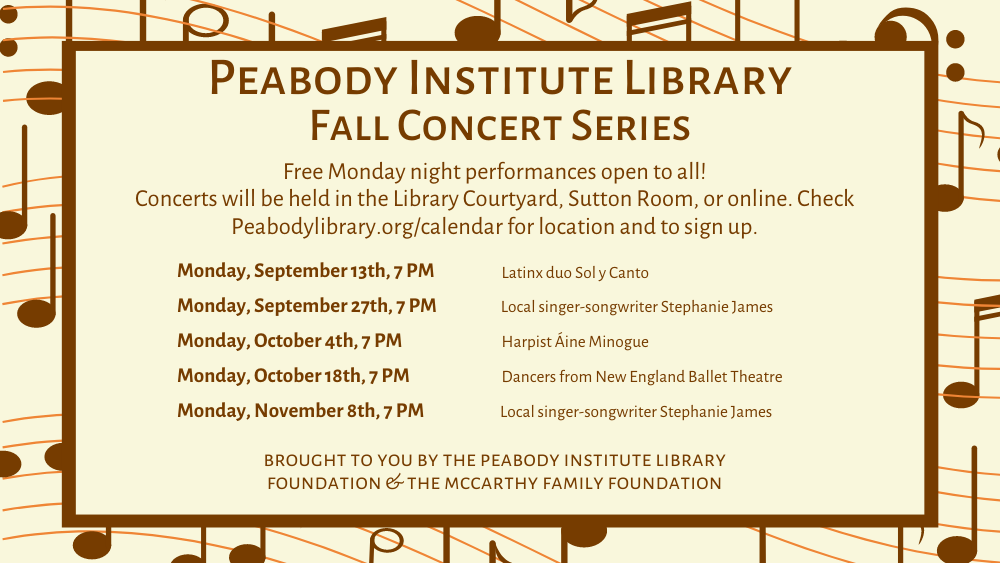 All shows are free and open to all. Fall concerts will take place outside in the Library Courtyard, in the Sutton Room, or online. Please check the calendar regularly for updates on location or details.

This concert is scheduled to take place in Library Courtyard but will be moved online in case of rain.

Brian and Rosi Amador will play a concert of Pan-Latin music for all ages.

Sol y Canto is the award winning Pan-Latin ensemble led by Puerto Rican/Argentine singer and bongo player Rosi Amador and New Mexican guitarist and composer Brian Amador. Featuring Rosi’s crystalline voice and Brian’s lush Spanish guitar and inventive compositions, Sol y Canto is known for making their music accessible to Spanish- and non-Spanish speaking audiences of all ages. Rosi and Brian are often joined by their daughter Alisa Amador, whose powerful songs and gorgeous, supple voice have launched her onto the Boston singer-songwriter scene.  On occasion the group is accompanied by virtuoso musicians from Latin America and the U.S.

Sol y Canto’s original songs are distinguished by poetic, often quirky lyrics set in a framework of varied musical styles with surprising twists. They can make you dance, laugh, cry and sigh all in one concert. Their arrangements of classic and contemporary Latin tunes are always fresh and original.

This concert is scheduled for the Library Courtyard; Rain date is September 29th, but will be moved online if it rains both days.

Peabody native and recording artist Stephanie James brings an evocative, fresh experience to the world of pop music. With a voice often described as “stunning” and “soulful”, Stephanie is a gifted storyteller who masterfully touches the hearts and souls of her fans. Both raw and refined musically, the songs solidify Stephanie’s status as a poised and powerful performer often likened to a revival of legendary Linda Ronstadt combined with modern day super talents Sara Bareilles and Kacey Musgraves. James released her debut album “Unbreakable” in collaboration with Grammy-nominated producers Jorel Corpus and Simone Torres. The album explores vulnerability, self-reliance, themes of growing up, and learning from the past. Stephanie is bi-coastal, spending much of her time in Los Angeles where she lives today, and the greater Boston area where she grew up.

This evening of music from the Celtic countries will celebrate the beauty of this Season of Harvest and the turning of the year!

The Old Celtic calendar celebrated the natural turning of the seasons and paid particular attention to the solstices and equinoxes. During these times, it was believed that the veil ‘between the worlds’ was very thin….

By times joyous and solemn, this Pan-Celtic odyssey is an enchanting evening of music,  storytelling, and tradition that is appropriate for all ages..

The New England Ballet Theatre season starts with Christopher Fleming’s “The Myth and the Madness of Edgar Allan Poe” in October, drawing on the holiday theme with family-friendly spooky fun and a visual re-telling of Edgar Allan Poe’s life. Dancers from NEBT will present an excerpt of their season-opening ballet, and will leave time for questions from the audience.

***All 3 Library Locations will open at 12pm this coming Monday, September 20th, to allow for an all-staff training.***

Per the Peabody Board of Health, masks covering the nose and mouth must again be worn while inside the Library and all City of Peabody buildings. Thank you for helping to keep Peabody healthy!